Haibun is a form of contemplative reflection using prose accompanied by haiku poems that can stand on their own.

Ken Jones (1930-2015), a seasoned Zen Buddhist practitioner and master writer of Haibun and Haiku leaves us with a wealth of wisdom and work concerning this expressive art. When working a Haibun, Ken Jones reminds us to, “write only when you are strongly moved, when there is some kindling of the imagination, when some intriguing theme appears which won’t let you rest, when you have something extraordinary to share with others—even an ordinary thing seen in an extraordinary light…”– from Ken’s Corner- Part 2, Contemporary Haibun Online website.

Ken Jones advises to master the art of writing haiku before attempting to write a Haibun. Haiku is a condensed form of poetic description that embellishes the descriptive prose of the literary form known as Haibun. The Haibun that is written as a result of haiku should enhance the tiny three-line poem, adding another colourful dimension to one’s inspired writing.

Ken Jones suggests to write the haiku then compliment the haiku by writing the Haibun. From his experience, Jones feels that haiku is easier to render before considering to write the prose. One avoids extracting the haiku (word for word) from the prose piece which is not the Haibun way. This is why Ken Jones advises writers first master the art of writing haiku before writing the Haibun. This way the writing, both poem and prose, remain vivid, vibrant, moving, and true to form.

Following is my attempt at working the Haibun way. Seeking inspiration from my own tarot deck of photo montage cards, I first composed the haiku then the Haibun. My 4 original Haibun and Tarot on display here: 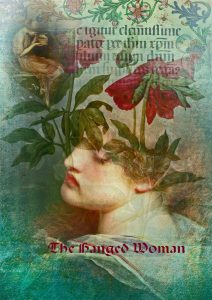 She once showed me how to count the moments by the drops of rain falling from the leaves of the summer magnolias. In her box of joy there were all the tears that spilled onto the cloth she called the world. The world she knew to be indifferent to her passions.

This morning a rainbow encroaches on her once grey sky— grey as the hair she combs. 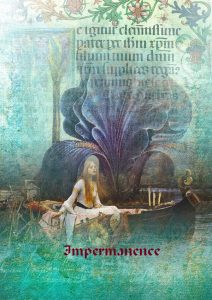 Last winter when the cold froze the lake behind the house, a pool of motionless water a slate-blue-green held plankton and a tadpole that once drifted into the palm of my hand as weightless as air. Surely I’m not the only one who drifts downstream where angels dare to tread.

on warm skin the smell 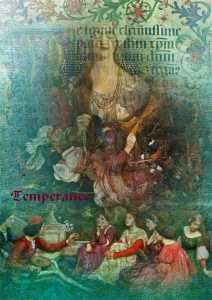 He who has travelled the Seven Seas, has sailed ships to Africa, to China and uncharted territory in midwinter when no one ever returns—talks of silk robes and turtle doves and the aroma of cinnamon and clove; asking them to envision biting into a peach the size of his fist now open on his three-fingered hand.

The Devil. I. Ebaen, Haibun & Tarot

She sits by the stream enraptured, mesmerized and wondering who this beautiful creature is, as every so often and ever so carefully he dips his hand to grasp at water.

beneath a glint of light